Learn how to create a website that reflects who you are as an artist and launches you closer to your dreams.

Created in partnership with

Your website is more than just a place for fans to listen to your music. It's where you establish your brand as an artist, band, producer, or performer; gather email addresses from people who actually want to hear from you; and sell directly to your fans without going through any middlemen. The good news is that it's easier than ever to create a stellar site of your own, and you don't need to know how to code or hire a developer.

In this free course, we'll hear from Delaney Gibson, Chief Artist and founder of the creative agency, CCXA, about her best practices for putting together an effective, easy-to-update website, and how your website fits into a more comprehensive marketing strategy for your project. Sign up today to get a 30-day free trial of Bandzoogle so you can put your learning into action right away. You'll also get 15% off your first year of Bandzoogle membership! 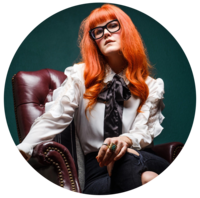 Delaney owns a wealth of lessons learned from an impressive career in music as a performer and singer-songwriter. She’s a classically trained vocalist and multi-instrumentalist, but is best known for her knockout performances as an independent and signed recording artist, as well as on international stages, backing the likes of Barbara Streisand, David Foster, and Barry Manilow. She’s played over 1,000 engagements across the US and Europe and has performed live on the BBC, on the Fox TV Show, “Boston Public” and the MTV Show, “My Own” amongst others.

As a designer, photographer, and art director, Delaney has a powerful skill set to shape creative brands from a perspective that harmonizes with the music it’s representing. She’s worked as a consultant for Bandzoogle and has also presented on branding, image consulting and social and online presence as a panelist at the ASCAP Expo. The branding game is one Delaney knows how to play well. She has successfully launched a multitude of successful blogs and social accounts. Her band signed a record deal in 2015, with major assistance from the Instagram presence she created– that is the power of building your brand.

This course is specifically created for independent musicians and artists considering how to move their careers forward by building a website. If you already have a website, you can also take the course to make sure that you're getting the most from your online properties.

Bandzoogle is a platform that empowers musicians to build effective websites for their music. You don't need to use Bandzoogle to take this course, but it's one of several great options for hosting your website that we'll discuss within the course — and they've included a special offer within for Soundfly students.

Are there any requirments?

All you need to take this course is a music project you want to promote. It will help if you also have high quality artist images to use as the visual foundation for your website.

It takes about an hour to go through all the videos and readings in this free course.

Who created the course?

This course features interviews with Delaney Gibson, a creative director and musician based in Austin, TX who has built dozens of sites and worked with countless artists on their brand presence online. Many of the lessons were also created by the Soundfly Team with input from our friends at Bandzoogle.

You'll learn how a website can support your goals, what types of content the best musician websites share, which platforms are the best for publishing and hosting, and how to fit a website into your longer strategy. You will also encounter many examples of other websites along the way and how those sites support the artists that built them.