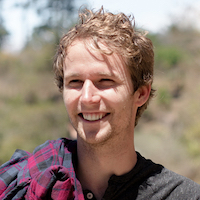 Filmmaker, entrepreneur. I'm an accidental filmmaker. I pursued a passion for change and having an impact, and in doing so, discovered that making videos and films is one of the most powerful ways to do that. I'd love to help others develop the skills to pursue their dreams as well.

Chris Temple is an award-winning filmmaker and humanitarian. As the founder of Optimist, he's best known for directing and producing the feature films Living On One Dollar and Salam Neighbor. His documentaries and virtual reality films have been released by Netflix, National Geographic, Starz, and The Atlantic and featured at AFI Docs, CPH:DOX, and Hot Docs Film Festivals. Most recently, he directed, filmed, and produced the unreleased feature documentary, Five Years North, set to premiere in 2020.

Every film and commercial he makes has a purpose. His projects have raised over $91.5 million dollars for the film's causes. For his efforts, he was recognized alongside Bill Gates and Angelina Jolie as one of the Top 100 Visionary Leaders of 2015 by WPO/YPO's Real Leaders Magazine and given the 2016 Muslim Public Affairs Annual Media award alongside Hassan Minaj. Despite never having taken a formal film class — he has given over 300 keynotes and workshops internationally, including as a mentor for the U.S. State Department's American Film Showcase.

Are you a musician looking to turn your songs into videos or a budding director in search of a way to shape your narrative so it tugs at your audience's heartstrings? Chris is ready to help you get started crafting unforgettable stories.