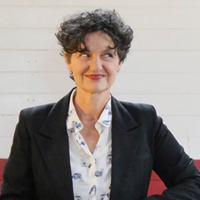 Songwriter, recording artist, coach. I'd love to help you write the best songs you possibly can, songs that grab people by the throat or the heart, or at the very least by the ear!

Charlotte's songwriting coaching service, Song Doctor, was launched in 2016 and she has presented numerous workshops, seminars and retreats as well coaching an online clientele. She is a frequent contributor to Soundfly's blog, Flypaper. Read her articles here.