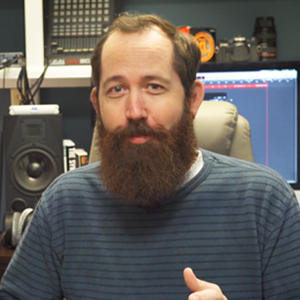 John Hull is an engineer, composer, and mixer, and the lead producer for most Soundfly courses. He's also the instructor of Soundfly's Advanced Synths and Patch Design for Producers course. John has worked producing music for ads at a commercial production house in NYC for major brands such as Coca-Cola, Google, and Jameson, and has mixed major film soundtracks, such as the indie hit Experimenter.

Shortly after graduating from Berklee College of Music, John headed to NYC to start an internship at a studio there. In his first week he was asked to chop up some 40 different mixes of existing tracks to picture for an advertising job — something he'd never done before and did his best with. A few days after submitting his work, he found a folder on his boss's desktop titled "JH's shortcomings," and his heart dropped.

He went home that night committed to show everyone he could do it. He practiced editing songs relentlessly in all different ways, without a mouse, without the grid, etc., until he became one of the fastest editors at the studio — and eventually got a full-time gig there.

Since then, he's been mixing and making music in all sorts of environments. The most memorable advice he ever got? "Stop EQing the snare drum. You're mixing a song. Not a snare drum." — a great reminder from his Berklee prof Susan Rogers to focus on the big picture, rather than getting lost in the weeds.

Learn how to move beyond presets and create a wide array of scintillating synth sounds for your productions.