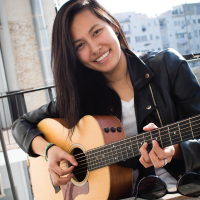 Composer, producer, vocalist. I love helping students develop their own sound. I believe that it is important to know the rules but it is equally important to be unafraid of breaking them to create something that is uniquely yours!

Born and raised in Malacca, Malaysia, Lavender Looi has spent the last twenty years creating music. Her experience in international music production and songwriting has led her through North America, Europe, and Asia, where she has worked as a composer, producer, and recording engineer for several renowned music studios including Dead Room Recordings and Grand Theft Records. Her original compositions and vocal contributions have been used in commercials for major brands including KFC, Grab, Gojek, and Pizza Hut. Lavender’s talents and love for music recently brought her to Berklee College of Music in Valencia, where she completed a Master’s Degree in Scoring for Film, TV, and Video Games.

Lavender is the co-founder of LAVICHI Entertainment LLC, a record label for artists, by artists! She is also part of the executive team and mentor for She Knows Tech which is an organization working towards closing the music tech gender gap by creating a community built around education, empowerment, networking, and continued learning.

Learn from Grammy-winning pop artist Kimbra how to harness the full creative potential of your voice in your music.