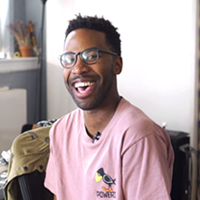 Producer, mixing engineer. I have been lucky and fortunate to have some great teachers. Now it's my duty to bring my knowledge forward.

Leon is a recording and mixing engineer based in Brooklyn, NY, who works in Pro Tools and Ableton Live. For over a decade, he's been working with some of the industry's biggest artists: Run the Jewels, Danny Brown, Kilo Kish, Action Bronson, Kaytranada, Twin Shadow, Tink, Flatbush Zombies, Zach de la Rocha, and How to Dress Well.

Leon began his journey interning at Stadium Red — the studio home of legendary hip-hop producer Just Blaze — before moving to Converse Rubber Tracks studio in Williamsburg. There, he honed his craft with figures like Matt Shane (the Grammy-winning engineer of Flight of the Conchords) and Geoff Sanoff (formerly at Stratosphere Sound), working with bands from around the world.

Later, he became the leading engineer at The Space Pit in Brooklyn, owned by the legendary Nick Hook. He worked with Hook and Hudson Mohawke on Vice's The Rap Monument, "Noisey's gazillion-rapper posse cut," recording everyone from Young Thug to Pusha T. Since then, he's worked on countless recording and mixing projects at the space, from Kali Uchis to Skrillex. He is currently developing his own label, working with artists like Queens rapper Remy Banks.